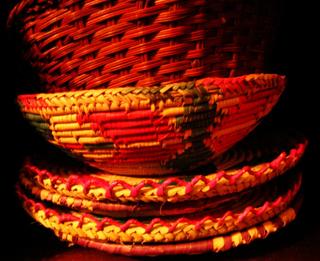 In characteristic Yasmine-is-a-Lazy-Bum fashion, I’m a few days late in posting this update. Here’s wishing you much ease and discipline in your fasting, whether it’s for Ramadan, Navratri, or the ten days from Rosh Hashana until Yom Kippur for the Jewish New Year. Abhi has a lovely post over at Sepia Mutiny entitled My first Ramadan, and Monologist’s post, My Navaratri, reflects many of my own goals and longings for this Ramadan.

The first night of Taraweeh – the nightly congregational prayers offered during Ramadan – the imam announced that the masjid would be holding a food drive during this upcoming month and everyone should donate as much canned food as possible so the masjid could pass it along to the local food bank. He added that when he contacted the head of the food bank, the man there said in relief, “Thank you, I don’t know what we would have done otherwise; our shelves are almost empty.” The imam paused while the congregation mulled this over, then pointed out, “Most of us, on the other hand, don’t even know anything about that sort of hunger. We may be fasting during Ramadan, but we still spend twelve hours everyday thinking about what types of food we will prepare for iftar [the breaking of the fast at sunset].” We all laughed self-consciously, because we knew how correct he was.

Sure, we who have bewildering arrays of food to choose from at sunset are privileged; but maybe, in the long run, we’re also the ones that God rolls His eyes and shakes His head at. You know? All I know is, in our relative wealth, we often forget to be thankful for what we have, and to show active compassion towards those who lack the same.

A sheikh and a disciple are walking quickly toward a town
where it’s known there is very little to eat. The disciple
says nothing, but he is constantly afraid of going hungry.

The sheikh knows what the disciple thinks. How long
will you be frightened of the future
because you love food? You have closed the eye
of self-denial and forgotten who provides.

Don’t worry. You’ll have your walnuts and raisins and special desserts.
Only the true favorites get hunger for their daily bread.
You’re not one of those. Whoever loves the belly
is brought bowl after bowl from the kitchen.

When such a person dies, bread itself comes to the funeral
and makes a speech: “O corpse, you almost killed yourself
with worrying about food. Now you’re gone and food
is still here, more than enough. Have some free bread.”

Bread is more in love with you than you with it.
It sits and waits for days. It knows you have no will.
If you could fast, bread would jump into your lap
as lovers do with each other.

Be full with trusting,
not with these childish fears of famine.