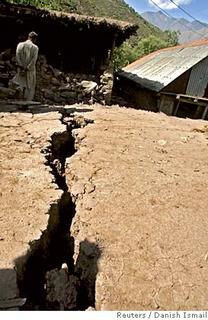 My eyes, and my heart, ache from three days of reading about the earthquake in South Asia. For most of Saturday, I sat at my father’s computer, alternately updating Excel/QuickBooks spreadsheets, downloading mp3s of Quran chapters for my father (I prefer Sa’ad al-Ghamidi; he wanted Abdul Rahman al-Sudais), and compulsively hitting “refresh” on news websites for the latest coverage of the earthquake. With a sobering magnitude of 7.6, the earthquake’s estimated death toll has climbed from a few hundred to over 30,000 in the course of three days. The ever-increasing numbers, and especially the stories of people digging through rubble with their bare hands, bring back the heartbreak of the Asian tsunami last December.

Early Saturday morning, when we woke up for the pre-sunrise breakfast to prepare for our fast, my father mentioned in passing, “There’s been an earthquake in Kashmir. A whole village was wiped out.”
At noon, Somayya’s father called, inquiring, “Have you called Rawalpindi?”
“Yes, last week,” I said.
“You haven’t called today? There’s been an earthquake near Islamabad.”
“What? I thought it was in Kashmir.”

Every news website we skimmed mentioned Kashmir and Islamabad. We panicked, thinking of my mother’s family in Rawalpindi, not too far from Islamabad, the Pakistani capital. I hunted for every map I could find; most did not list smaller towns and villages.

“Ummy, you need to call ‘Pindi.”
“It’s one a.m. there right now. They’ll be sleeping” she said uncertainly.
I almost snapped back, “Maybe you should be worried about whether or not they’re still alive,” before considering that that was the last thing she needed to hear at a time like this. But my father was home a few minutes later, and his urging did the trick. They managed to get through to Rawalpindi, and alhamdulillah, everyone is fine, although the aftershocks continued even while my relatives were on the phone with my parents. Some, I read later, were up to 6.3 in intensity.

I read temors reached as far as Ahmedabad in Gujarat, India, my friend D’s hometown. I called her. “D, I was just reading about the earthquake. Is your family in India safe?”
There was a long pause. “I thought that was in Pakistan.”
“Well, mainly Kashmir. But I read they felt it in Ahmedabad, too.”
“Hold on, let me check with my mother.”
She called me back a minute later, with news that everyone was okay.

Mansehra is near Abbottabad, which is near Attock and Hazro, which are part of the same district as my own village in Pakistan. In 1995, we stopped for ice cream in Abbottabad, and I was wide-eyed at the wide orderly town, having been a village girl for a year by then. Mansehra is not far; it’s painful to read stories of the hundreds of children who died there (as well as the 400 schoolchildren in Balakot) when their school buildings collapsed on top of them. They’re already being referred to as the “lost generation.” Every place is connected somehow to yet another place; the world feels smaller every day, everything hits a bit closer to home every time I turn on the radio or surf news websites. This was never more apparent to us than now.

Disaster coverage tends to focus on urban areas, and I felt selfish for resenting it on Saturday when all we heard was “Islamabad and the upscale residential Margalla Towers” nonstop and kept asking our friends and family, “But what about the village? Hazro? Attock?” But it’s natural to think of our own homes at a time like this, and necessary to remember that those who were poor and lacking before the earthquake are even more so now. If the earthquake had shattered District Attock, we would have been devastated. It is unsettling to read Chai’s notes about lack of proper rescue efforts in Islamabad, and I think of how much more complicated such attempts must be in rural areas, in villages similar to my own, where streets and alleyways were so narrow that even taxis had difficulty maneuvering through, much less emergency vehicles and equipment. The logistical problems of getting food and medical supplies to villages in the mountains must be especially difficult. And winter is already setting in, in some areas.

Our television is limited to about two (static-prone) local channels, so most of the news we’ve been receiving has been through family and online news sources. This has been especially difficult for my mother, who wishes we had cable channels so she could see and understand the effects of the earthquake with her own eyes. Photographs, though distressing, have been more helpful in conveying the impact.

Living in California, and especially in the San Francisco Bay Area, we’ve gotten used to the idea of earthquakes. After all, we’re sitting right on top of the fault lines. Friends in other areas shake their heads at the thought of us living right smack in the earthquake zones, but we laugh back and continue on. In the aftermath of this recent South Asian earthquake, local news stations have been emphasizing that the Bay Area has a 62% chance of experiencing a catastrophic quake like the 1989 Loma Prieta temblor. I still remember the 7.1 magnitude earthquake in 1989, which memorably collapsed the upper level of portions of the Bay Bridge and the 880 freeway, crushing cars on the lower levels. My father was working in San Francisco at the time, in one of those tall clusters of skyscrapers you see as you cross the Bay Bridge into the City, even though I could never figure out which one was his. When the earthquake hit, his building shook madly from side to side. Somehow he made it down several flights of stairs and twenty miles south to his friend Mr. R’s home in Belmont, where he stayed overnight. We at home in the East Bay, having felt minor tremors ourselves, watched television footage of flames and smashed concrete for hours, waiting to hear he was safe.

The Gujarat earthquake of 2001 hit close, too. I remember we had just walked out of chemistry lecture and were standing on the lawn outside, Somayya and D and our friend A and I, when someone absently questioned D about whether her family was safe in the aftermath of the Gujarat earthquake that had occurred a day or two before. She paled. “What earthquake?”
We mumbled something about 20,000 people dead. A thrust his cell phone at her. “Here, use this.”
D was dazed with worry, yet protested, “It’s long distance.”
He almost shouted at her: “I don’t care if you call India. Take the damn phone and call your parents.”

And then there was the minor earthquake back when I was living in Pakistan. Drowsy with my afternoon nap, I thought my mother was sitting at the edge of my bed, shaking it with her laughter. I’ve always liked telling this story. But what was only minor tremors at my end must have been more forceful somewhere else.

The stories of grief and loss coming out of the earthquake are heartbreaking. As Hemlock commented the other day on Monologist’s weblog, “Everyone is somebody’s someone.”

To those from Kashmir, Pakistan, India, and Afghanistan – I hope you and your loved ones are safe and well inshaAllah. Much strength and peace and ease. And relief, especially relief.

Knicq has an extremely well-written and thought provoking post, as does avari/nameh. Go read.

Karrvakarela also has a list of several organizations we can donate to for relief work.

Chai’s family is collecting donations for blankets and tents (about Rs. 270/$5 and Rs. 7000/$120, respectively) for those who have lost their homes. Please contact her for more information.